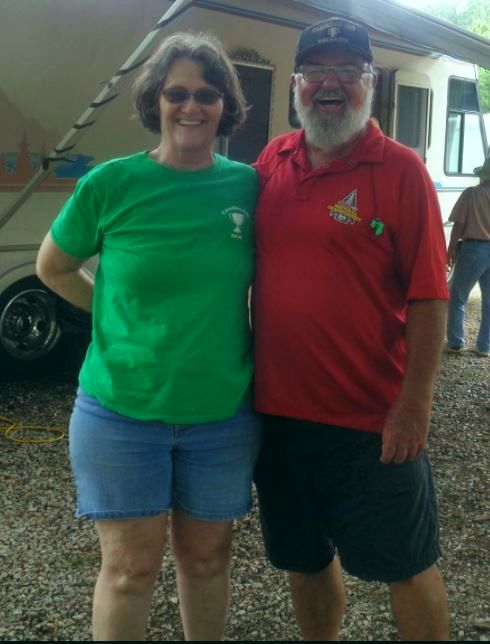 Frank & Paula Glover: Welcome to the 2017 Carolina Cup! All Photos by Parrish Brian.

All photos courtesy of Parrish Brian. The camera got soaked in the rain so the images suffered a bit, but the full set for the 2017 Carolina Cup can be found here on Facebook.

After several  years of volunteering for the Carolina Cup  at The Range in Oxford, North Carolina by working on the stats team (data entry for scoring), Frank asked me to work as a Safely Officer on one of the bays for the 2017 Carolina Cup. I started running scoring at various local matches and I felt comfortable with that. I agreed to work the Cup also because the leader of the group I would be working with is one of the safest shooters I know.

I worked Bay 5 with 3 other safety officers. Our Team: Rusty, Hal, David and Sadie. We also had an additional volunteer, Joe, for part of Saturday. Rusty was the team lead and my primary point of contact for planning. Instructions were fairly simple: he told me what time to show up. The rest was inferred: Plan for sun or rain. Come with everything you’d bring to a match except your shooting gear. Turns out that water proof boots were a plus. My feet stayed dry.

I opted not to run shooters but I ran scores (recorded times and points down) and pasted targets. The shooters don’t have to paste targets at the Carolina Cup, the Range Safety Officers running the bay take care of that. If you are the score keeper you also call the shooting order. And call it again every time you have a new shooter:

So a shooter should get a heads up about 3 shooters in advance of actually shooting.And they will get a reminder of their position as they move toward shooting.

I had a hacking cough for at least 10 days prior to the match but I figured if I could go to work, I could work the Cup. My voice was a bit squeaky toward the end, but it held out.

We started at 7:30 am Friday and 7 am Saturday. I live an hour away so these were early mornings for me. I always make time for breakfast. I took my first and only vacation day at a new job to work the match.  Why did we start earlier on Saturday? That is the morning for the traditional photo of all volunteers in the event t-shirt. This year we were all in Royal Blue. You can see it on Facebook here.

The match had a total of 14 stages, two stages per bay over 7 bays. No stages were shot across the road in the trees this year. Each had unique challenges. Frank is known for offering the unexpected. He didn’t disappoint. Since the match is no longer sanctioned and bound by IDPA rules, various bays offered challenges across a variety of pistol sports: zombie shooting, steel stages and traditional IDPA stages.

On Bay 5, our responsibility for the match, the match director supplied one canopy. One of the volunteers I worked with, Hal, supplied another (note the NCSU logo). These canopies provide shade in the sun and cover in the rain. They are critical for a good match experience. Hal also brought a cooler with water & ice too. There are a couple of volunteers who’s job it is to drive a Gator around to distribute water and pick up scores during the match, but it was very nice to have a cooler with drinks handy in the bay. 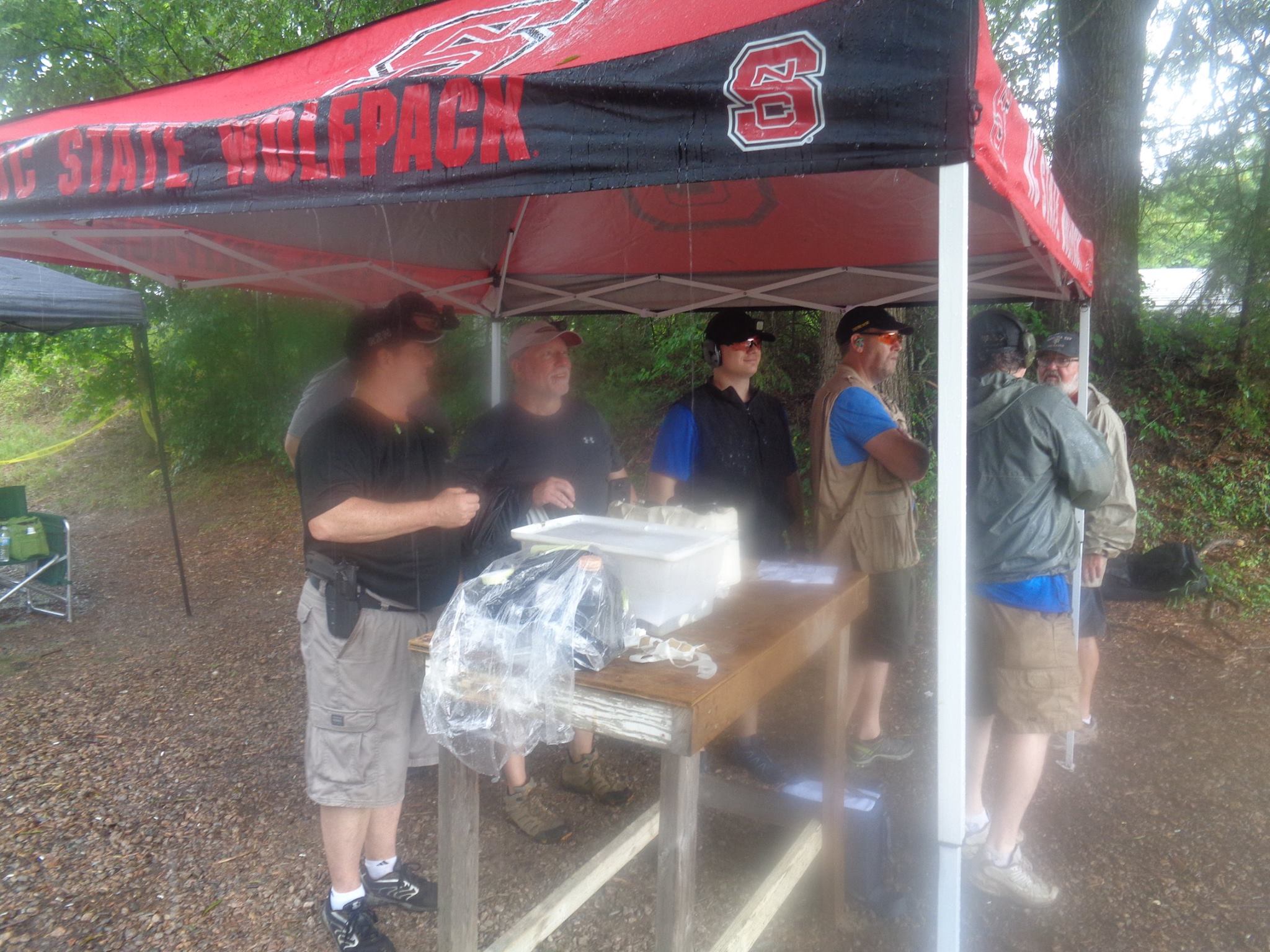 As for weather, we saw it all. We ran shooters in a light rain on Friday morning. Then we ran shooters in the sauna that was created by hot sun burning off the rain in the afternoon. Due to the Friday morning rain, we also found every hole that was just waiting to become a puddle. One was so deep and was stepped in so many times we named it in honor of the first guy that fell in. “Hal’s Hole: deep enough to soak your cleats.”.

Running shooters in the rain is slow. We dropped clear plastic bags (dry cleaning bags?) over every target to keep it as dry as possible. Here is the adult part of this post: These are unofficially known as “target condoms”. Yes, I really wrote that. Here’s a photo that Parry took showing these babies in action. 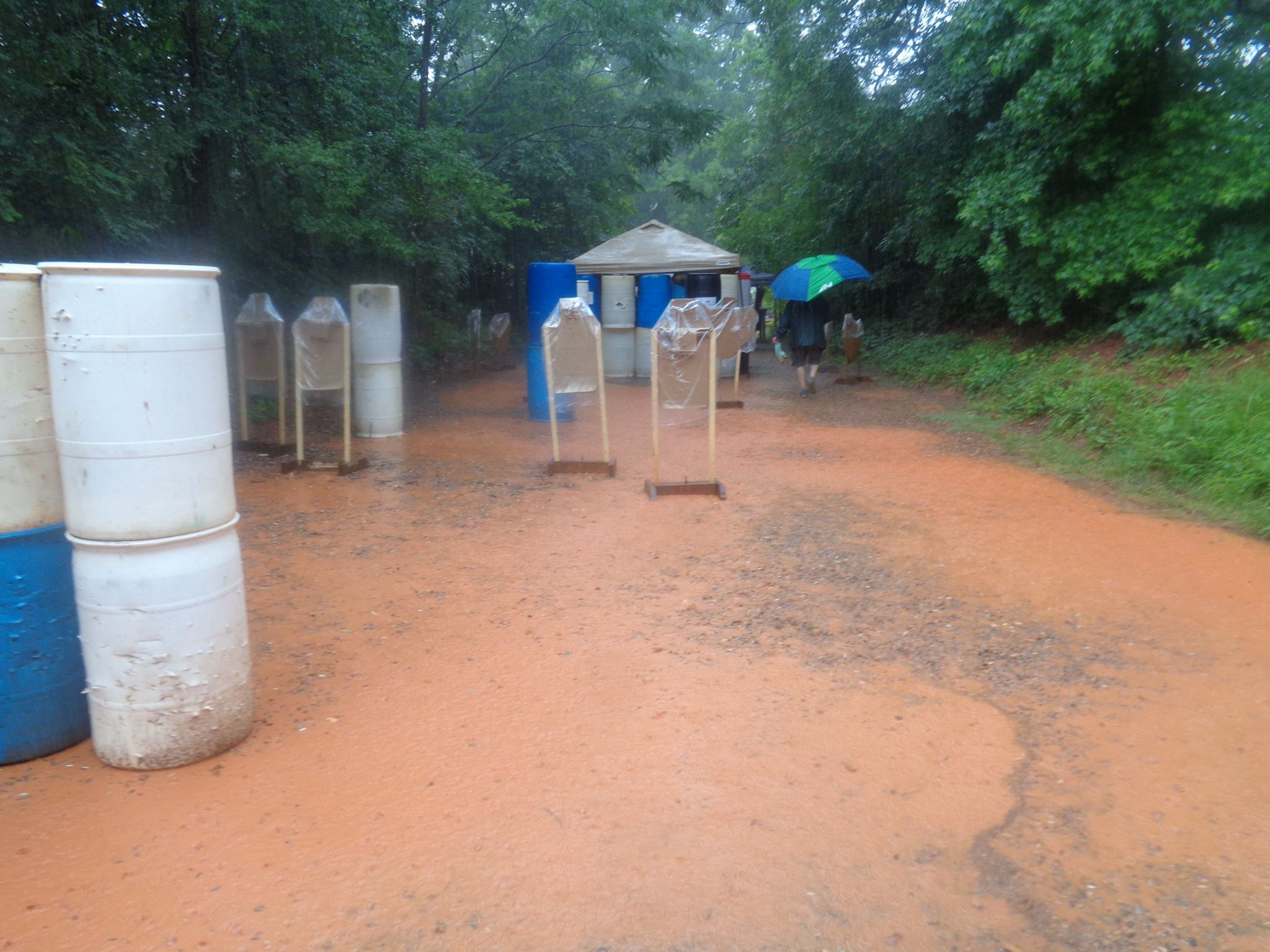 As you score the stage you must lift each plastic bag to apply a sticker over every hole. in the target. These are called target pasters. They are very difficult to use when they get damp, much less wet. It slows things down considerably.  I tried also juggling an umbrella. The umbrella was to attempt to keep the score sheets and pasters dry –  with limited effectiveness. We did the best we could do under the circumstances then appreciated the sun when if finally dried things out somewhat. 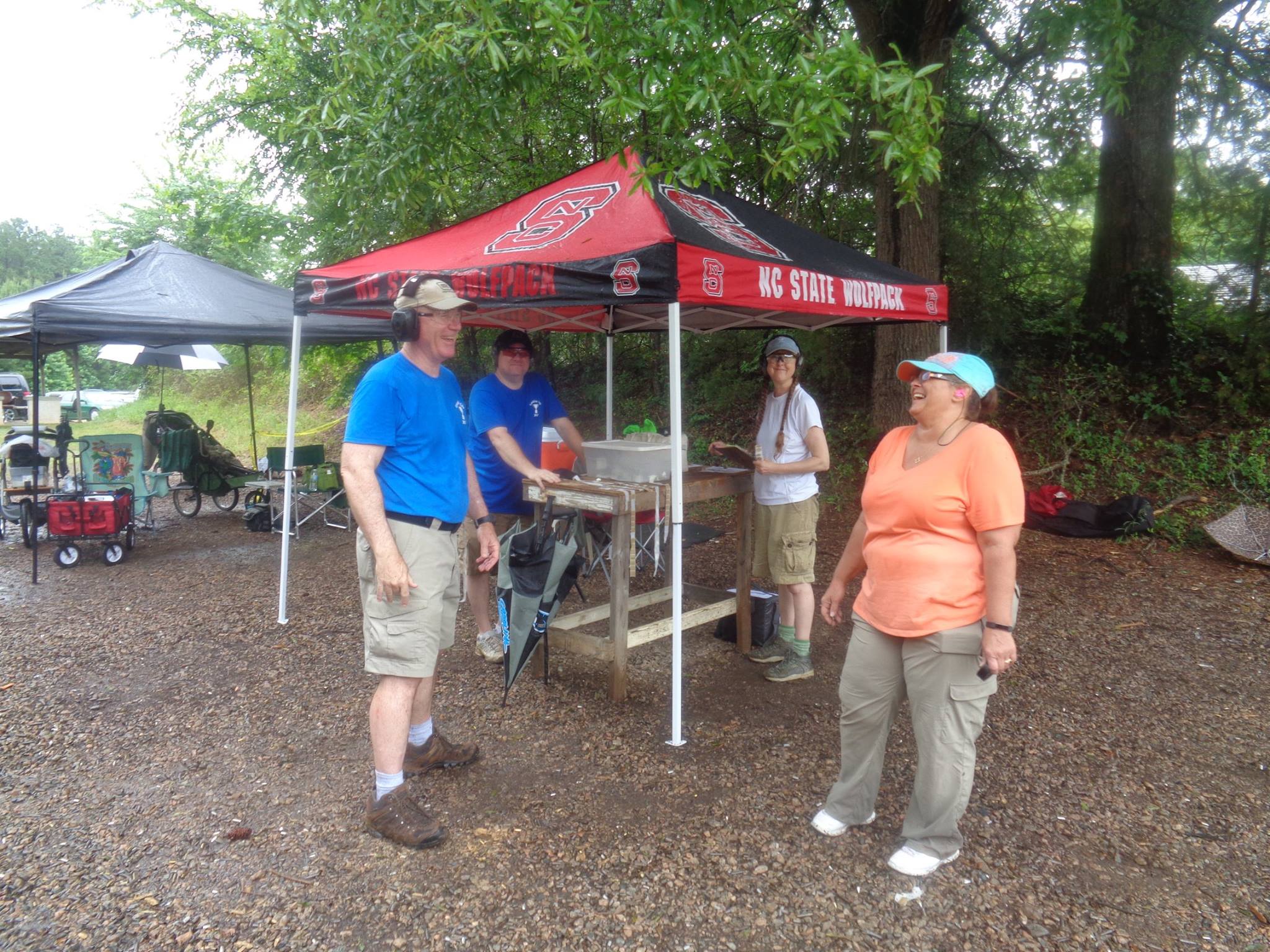 On Saturday we lucked out and were only running shooters when it was dry. It rained at lunch and then in the late afternoon we had a serious downpour. Neither impacted our shooters. But Bay 1 essentially flooded with the Saturday afternoon downpour and they did still have shooters in process. The link above to show rain proofed targets  also shows the flooded version of Bay 1.

I’m going to wrap up Part 1 of this post, but not before mentioning the highlight of the day Friday: lunch. We had the traditional southern offering of a bologna burger or a hot dog. I can get hot dogs many places, but I only get the opportunity for bologna burgers at the Cup. I figure I can indulge once a year. They have a food vendor onsite to handle the rush of hungry shooters at lunch both days.The selection is limited but the food is hot and the service is fast. 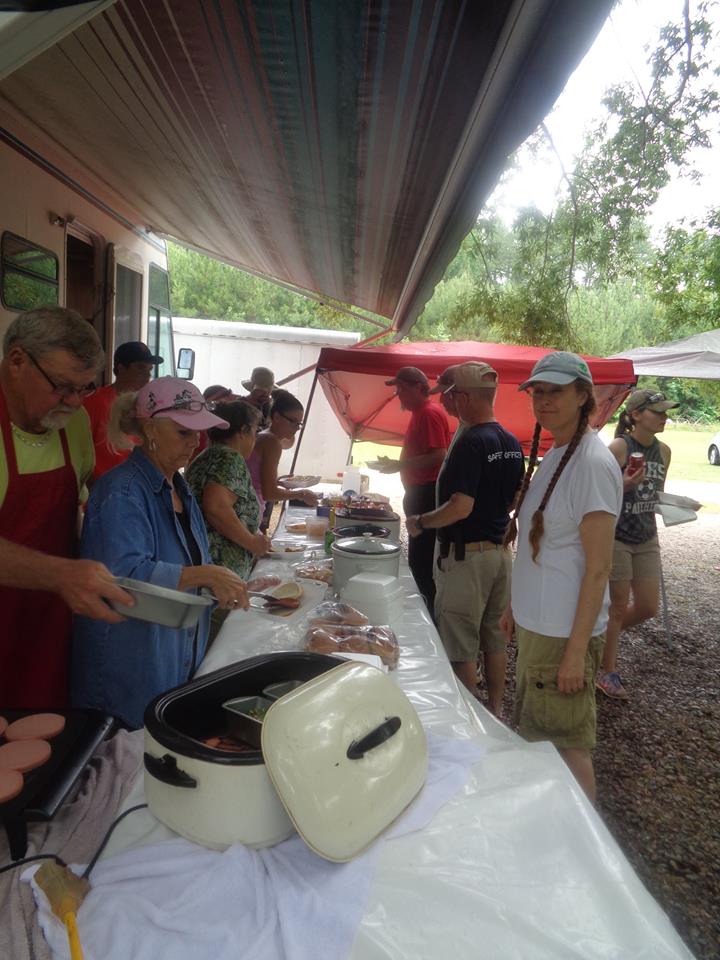 More on the match and my volunteer experience in Part 2.