Last year when I started competing and practicing on a regular basis, I decided to stock up on ammunition so that would never be a barrier to shooting. I came close to crying a few times as I parted with cash or paid my credit cards, but over a few months, I hit my goal.

With what has happened since I’m really happy I did that. Now, as I use up what I bought I am trying to replenish as I get close to the minimum level I’d like to keep on hand. But being rather frugal, I’m also patient.

Before the election and Sandy Hook, a reasonable deal on 9mm Luger was around 25 cents a round.  That is $250 per 1,000 rounds (without taxes). And I’d much rather buy in 1,000 round batches than have to run to the store for 3-5 boxes over and over until I feel stocked up again. My last 1,000 round purchase was from PDHSC in January for $238. They laugh at me now when I ask if they have more bulk ammo in stock.

I have a friend that has recently paid around $600 for a 1,000 rounds and I’m just not willing to pay that. At that price I may have to reconsider the frequency I shoot live rounds and force myself to spend much more time on dry fire practice.

What I’ve found though is that with patience and persistence, ammo is out there and not everyone is price gouging. 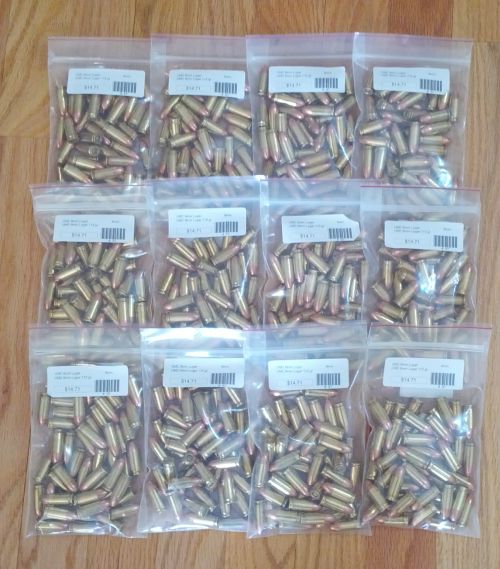 I’m not sure what the future holds but with some networking, tips from friends, and supporting businesses that are not price gouging, I’m hoping that I can continue to shoot without resorting to paying top dollar.

Of course, the real solution is to start reloading. But one thing at a time…