NOTE: This is the first guest post to my blog. The following was written by my shooting partner David Young. His enthusiasm is endless and he helps to nudge me when I lost momentum, so when he asked if he could post to my blog, of course I said yes! 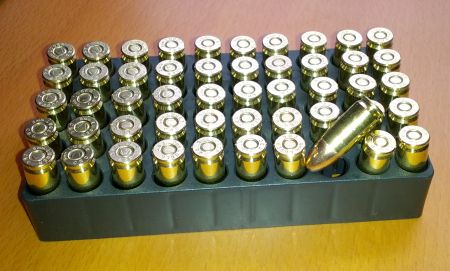 I just takes one…

Today, after about 24 months of regular shooting, I had my first squib round. I was breaking in my new XD9 Service pistol, so thankfully I was shooting slowly. About halfway through a box of recently purchased factory new Independence 115gr FMJ, I pulled the trigger and heard the classic “pop”. I’ve always heard it described that way, but in reality it’s more like shooting a paper-strip cap gun

The slide did not cycle (obviously), but I dropped the magazine, cycled the slide manually, ejected the spent case and began my inspection.

I field-stripped my gun and ran a bore snake down the barrel. Sure enough, the bullet was lodged about 1/3 of the way down. I was shooting at Personal Defense and Handgun Safety (PDHSC) in Raleigh. Without batting an eye the staff took the barrel into their work room and removed the bullet. Removal took about 15 minutes and I watched as the gentleman (I wish I remember his name) used a brass rod and hammer. No charge and no barrel damage.

Having a squib (safely) is one of the best learning experiences I’ve had since I began shooting. I’ve listened to the description countless times, but actually experiencing a squib is invaluable. I have no idea what the outcome would have been had I been under duress; say, during an IDPA match or intense training. During rapid firing I might very well have put another round through the barrel and destroyed my gun. I can only hope that the experience has imprinted itself and I’ll have the presence of mind next time to cease firing as I did today.

I’ve read on forums that the vast majority of squibs occur in handloads. Not this one, which means factory ammunition is not immune. It might be rare but it can happen.

By the way, I shot the remainder of the Independence with no issues.

Finally, I want to offer kudos to the staff at PDHSC. Of all the local gun stores I’ve been to in the Raleigh area, the folks PDHSC are hands-down the best. Their level of service, expertise and advice is without equal, in my opinion.