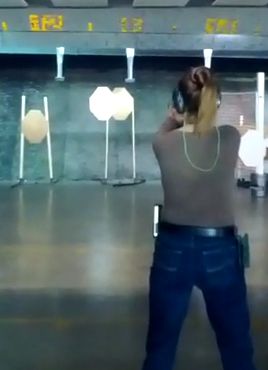 I went back in October to shoot another Wake County Action Pistol Match on 10/29. We got a late start due to conflicting events but still shot 4 stages. Total round count: 55. Special highlights: shooting from under a barrier and one stage shot strong hand only. Two of the stages were “run & gun” set ups requiring movement and two stages were shot from a stationary position. At this point the Monday matches fill up fast but the Wednesday matches fill slower – and may be easier to get into.

A past shooting partner came out for his first Action Pistol Match and I did my best to be a good tour guide and answer all the questions I asked at my first match.

When you shoot a match, you get one run through of the stage. The match director was generous enough to set up a stage in Bay 1 this morning at 9am for the Ladies Handgun League. I couldn’t pass up the chance to run through the stage a few more times. I lucked out and got 3 attempts. Each time through I focused on slightly different things:

This is FUN! Every lady that gave it a try was smiling after her attempt. It looks intimidating. I promise that’s only before your first time through. The typical reaction is “I want to do that again!”

Finally, I wanted to mention the good feedback you can get from video. My friend and I swapped off filming each other last Wednesday night and I got to rerun the stages from video and review my shooting. What feels really fast in the moment sure looks slow in review. I’m not a fast shooter and definitely not competitive, but if you want to see what shooting a stage looks like, I’m posting 3 of the stages below.

If you are local, want to shoot the match and have questions, the match directors do a great job of responding. If you want to talk to a participant, I’m also happy to answer questions to the best of my ability.

Bay 2: two targets each side of barricade, three paper plates (stand in for steel plates) in the middle – shoot at least one under the barricade. I shot 3 each side and a single under – but I had misses – 11 rounds

Stage 1: (No Video) Five targets, two each side and a swinger in the middle. All strong hand. Start with the gun on the table, pull the cord to trip the swinger then pick up the gun with one hand. 10 rounds.

Stage 2: 4 targets all partially covered. Two rounds in each, reload, two more in each. 16 rounds.