I read about the IDPA Triple Crown in several blog posts. This one says it best. I wanted to shoot but I’m making trade-offs financially after purchasing my first 1911 and all the accessories to set it up for competition. I’d been to The Range only once before to shoot my IDPA Classifier but I had briefly discussed working matches with Frank when I was there.

Even though I wasn’t willing to spend the money to complete, I wanted to see how outdoor stages differed from what I’d been shooting on an indoor range and I wanted to widen my network of shooting friends. So I called and volunteered to work the day and night match on Saturday. Frank said he’d put me to work and to come on up.

It seemed like a good idea at the time but when I pulled into the parking area at 9:30am Saturday morning I saw groups of people chatting and I thought, “What was I thinking? I don’t know a single soul here but Frank and he’s going to be very, very busy”. I took a deep breath and parked the car. I checked in at the only functioning building and told a stranger that I was here to help out. Again, I had second thoughts about this impulsive idea. 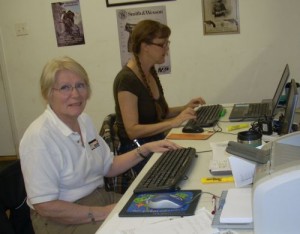 Focusing on the job: entering scores with the “Den Mother” who made me feel welcome.

Then I found something I could do that really needed to be done: I networked the two laptops used for the match scoring program. I do tech support for a living and am happy to leave the job behind when I head to the range, but in this case it won me a new friend and the “Den Mother Stamp of Approval”. I was immediately recruited to enter scores and that nagging feeling that this was not my brightest idea disappeared as soon as her words were out.

We had some time to wait before the first scores would come in, so Frank offered to let me ride along while he took care of last minute setup issues. He showed me how to drive the Gator (think: topless golf cart) and he told me a bit about several of the stages as we fine tuned them. Then he got a call:  “Honey Bunny’s pants are falling off.” Say what???

Turns out  the match director’s nickname is “Honey Bunny” and they set up a special stage in honor of (or was it to bust on…) him. Turns out it’s his nickname but also what he calls everyone he meets. Of course I didn’t know this yet… Here’s the setup for the stage: You are in a convenience store after an IDPA Sanctioned Match when you hear “Hey Honey Bunny!!!”. You turn around and Honey Bunny gives you a hug. Just at that moment, bad guys enter the store shooting. Start Position: You with Honey Bunny hugging you with his revolver holstered on his belt. You draw the revolver to shoot the bad guys. In this case, the stage Honey Bunny is a 6 foot stuffed rabbit. And his pants kept falling off due to the weight of the gun. 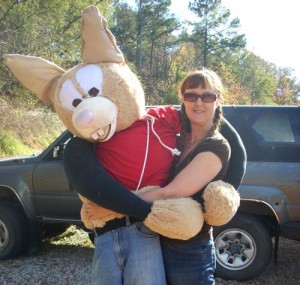 I think someone mentioned suspenders. I asked Frank if he had some rope and told him I could fix this for him. And I did! Frank and I pulled up to the stage and got out of the Gator. There were 8-10 shooters looking at us and Frank looks at me and says to go ahead and fix the rabbit. No pressure here, eh? Remember I don’t know any of these people, yet, and I’d like to make some new friends.

I used a bowline on a front belt loop, took the rope behind the rabbit’s head and tied off to the front belt loop on the other side of his zipper. One of the guys suggested I tie to the back belt loops too. I was already on it. We had plenty of rope so I secured the 2nd front belt loop, went over the shoulder and diagonal across the rabbit’s back to ensure the rope wouldn’t slip off his shoulder. I passed the rope in front of the rabbit’s neck to get opposing tension for the last belt loop in the back and muttered under my breath, “You’d never do this with a person” and one of the shooters asked me if I taught bondage classes. That got a good laugh! One shooter gave me a fist pump and that really meant a lot to me. And now Frank has a new story to tell about the bondage bunny. 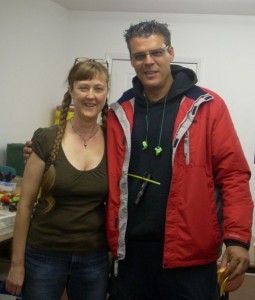 Sadie with the original Honey Bunny: my boss for the afternoon.

I managed to sneak in a few photos of the most intriguing day stage (think: high!) but spent most of the match entering scores. Once the day match was complete, I offered to help do the final setup for the night match and Toni put me to work. That’s when I heard the full disclosure about the Honey Bunny moniker.

Toni was very patient with my numerous questions while I helped set up targets and props for the night stages. He chatted with me about flashlights, the best way to shoot the stages we set up and how these matches were similar to or different from other matches. I helped clean up used targets from previous matches and tried my best to be useful.

Frank fed the staff and range safety officers Brunswick stew made by a local church that was excellent. The night match started around 6:30pm. The night stages vastly exceeded what I thought was possible and I’ll cover that in a future post. The last scores came in around midnight and I headed home by 12:15am. Very tired but very happy.

I didn’t meet many shooters, but I did meet people that helped me to get a better understanding of how competitions work and more important, made me feel welcome. I definitely see more volunteering in my future.

For more on the stages in the match, keep reading.

7 thoughts on “The Triple Crown: My Volunteer Experience”