Yesterday, even though I had a bad cold, I showed up for the Women On Target event at the Durham County Wildlife Club. I’ve volunteered at previous events, but this was the first time I’ve attended as a participant.

Sixty ladies attended and were separated into groups of 12 then spread across 5 clinic sessions. If you asked to be in the same group as friends or relatives, they will do their best to make that happen. I showed up solo and made a few new friends during the day.

Our group started with archery. We used practice bows. The instructors focused on form and I was able to hit the target, but I never actually figured out how to really aim the arrow. They have a trail with archery targets that sounded like a great way to spend an afternoon. The other big plus was that no ear protection was needed. It was nice and quiet.

Next we tried skeet. We shot 20 gauge shotguns at flying clay targets. They launched from a “high house” and flew left to right across a clear field (essentially toward us) and we did our best to lead the “bird” then knock them out of the sky. I was amazed that I actually hit about a third of my targets. For the second round we tried shooting from the “low house”. These launched right beside us and headed up and across the same field, essentially away from us. Again, I was amazed that I hit anything. Typically shooters will move to 8 different positions and shoot from both the high house and the low house.

We ended the morning at the pistol range. We shot .22lr pistols. The instructors there knew me for the most part, so I helped one of the instructors diagnose a finicky Ruger SR22. Sweet little gun, but I don’t think it liked the ammo. This was copper clad but somewhat blunt on the tip. I shot two full magazines with no issues, but had misfeeds, jams, or failure to feed on three other magazines. I like the white dot sites and I think it would make a great training gun with ammo it liked.

They fed us lunch catered from Moe’s. My cold left me with not much of an appetite, but that was my issue.They feed you well at this event. 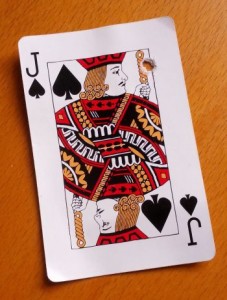 After lunch we started with .22lr rifles. I shot 3 different models and shot at three different ranges: 40 yards, 75 yards and 100 yards. We shot from a benchrest and this is the first time I’ve ever shot with a scope. Like pistols, this requires you to aim and I liked that: taking my time to line up a shot then nail it. We all picked a playing card and set them up at 40 yards. I managed to hit mine – with the first shot.

I finally have an appreciation for distance and scopes.

Our last station for the day was trap. We shot 12 gauge shotguns from 5 different positions at clay targets moving away from us. As the instructor said, “Pull! Bang!”. The longer you wait to shoot it, the further away it gets and the tougher the shot gets. I managed to hit between a third to a half of my targets and found the shotgun recoil wasn’t that big of a deal. I also learned to get the heck out of the way of the shells when I broke open the gun after the shot. I only got popped in the face once.No harm done.

It was a good day. I’d never shot a shotgun before and I found I could not only shoot them, but I could hit moving targets. Amazing.

I’d tried archery and .22 rifles as a kid at summer camp – about 4 decades ago – and still see the appeal. Pistols are still my first love however.

If you know any women who would like safe, enthusiastic exposure to a variety of firearms, the local Women on Target events in the spring and fall at this facility and the facility where I volunteered two weeks ago are a great opportunity.

Update: I saw this article posted today over at Cheaper Than Dirt on all the basics of pistol shooting so I thought I’d add that link here for new shooters.

Update: Here’s a link to an article in the local paper about the WOT events: http://www.newsobserver.com/2014/05/07/3843729/shooting-clinic-helps-women-learn.html