Just over a year ago (September 2016), my home was burglarized. I went to Chicago for two days on business. I arrived home after 10 pm. I was tired and just wanted to drop my luggage and sleep. I came in the front door and immediately noticed that the house wasn’t the way I left it. You just know. At first I thought someone was playing a prank, because nothing seemed to be missing on the first floor. Then I noticed the back door was cracked open. And I got scared.I didn’t get to sleep until hours later.

I’m not going to described the process of discovery, fear, sadness and grief that followed. It’s like picking at a wound that hasn’t ever quite healed. What I do want to do is share some things I learned in the aftermath. And yes, I have taken safety precautions in case the thief decides to return..

Police deal with the theft of guns seriously, but not urgently.

I called the police and an officer and arrived to assess the situation. He called in  CSI and she dusted for fingerprints. She was kind enough to tell me how to best clean the mess she was making. My prints are on file due to my concealed carry permit, so in theory they could rule out my prints and ask me about any other prints found. They never did and to be honest, I’m not sure they ever processed the prints they took. When I asked, I was told there was a back log for processing.

The only information the police officer wanted the night I reported the theft was the serial numbers of the firearms taken. They were in a spreadsheet on my laptop. That was also taken. I did have data backups but no computer to use to pull the data until the next day at work. The police report listed 23 items stolen: laptop, guns, knives, pistol magazines, holsters, custom shooting lenses, and ammo. Lots of ammo. The police were not interested in a complete list. They wanted items with serial numbers and that were related to weapons. In contrast, the claim I submitted to my insurance company listed 149 entries.

The guns are probably in New York

The police told me that there appeared to be a gun pipeline up I-95 to New York. The last few guns they had recovered were all found there.

The detective that took my case called with additional questions. He and another officer came to my house a few days later to examine the route of entry and a quick walk through to see where items were taken. There was on follow up call to ask questions to attempt to link this to like crimes, but there didn’t seem to be a link. He asked if I shot at Triangle Shooting Academy? Yes, I did. Then he wanted to know if I have gun decal or stickers on my car. In that case the answer was a firm no. That ended that line of investigation.

The detective called after 90 days as a final follow up to ask if I’d recovered anything. He marked the case as inactive at that point.

I asked several times if they felt there was any chance my items would be recovered. I honestly wanted to hear, “Not really, You should plan on not seeing any things that was taken again.” It would have helped get to closure faster. Instead, I heard, “we just do not know, It’s possible.” which is true but wasn’t really helpful to me. It’s been over a year. At this time, nothing has been recovered.

Save brass casings, label them, and save them separately from your guns.

The CSI asked if I had brass casings that could be associated with the stolen guns. It turns out they have a voluntary program to collect casings shot from stolen firearms. They use the casings to track / determine if the stolen weapons are used in other crimes. I had never heard of this program. I did have quite a few casings but they were all mixed together with other brass I collected at various ranges, so even if I wanted to provide casings, I couldn’t. The brass casings that came with the guns I bought were in the carry cases with the firearms and were also stolen. 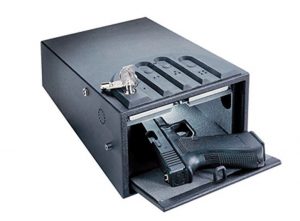 Any safe is better than no safe.

I had a loaded gun in a small safe by my bed. The safe was bolted down.

I know they saw the safe because they snatched two loaded magazines and a tactical flashlight that was next to the safe. I didn’t check it until the police officer arrived. I asked him if I could open the safe and disclosed what was in it.. He told me to open it up and it was just as I’d left it. The safe: Gunvault GV1000S Mini Vault Standard Gun Safe for $99.

If you own enough ammo, the thieves can’t carry it all

I had recently placed a large order for ammunition. When I find a good price I stock up. I had stacks of boxes filled with 9mm rounds. I had also been camping the weekend before and after returning from that trip, left a large black duffel bag sitting out in the room with the ammo. The duffel bag was gone and I’m sure they loaded it with as much ammo as they could carry along with everything else that was missing. But I still had some boxes boxes left. Can I just say I hope the weight of the ammo they snatched caused injuries as they attempted to carry it away. And I’m guessing the Lands End duffel carried it all with no problems. It was bomb proof and I really miss it.

The next post discusses the insurance claim, replacement & aftermath.

You can find that here.