This article published on Triangle Tactical back in March started me thinking about the thumb safeties on my guns: Why is it so hard to get a thumb safety right? 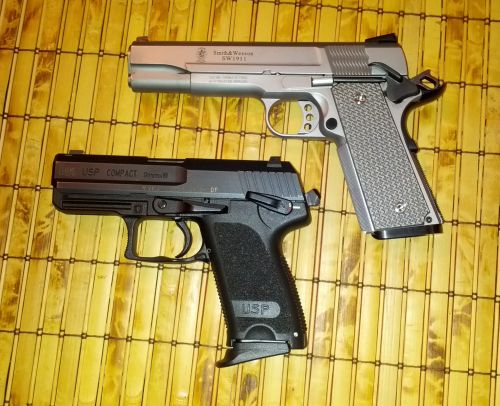 I own two pistols with thumb safeties: a S&W 1911 and an H&K USP Compact. They operate very differently and that difference didn’t really jump out at him until I read Ben’s post.

The “Soft Safety” – The first thing I had to learn when shooting the 1911 was to wrap my thumb over the top of the safety when I draw the gun. If I don’t, and the thumb rises up just a slight bit, the safety nudges up and the gun will no longer shoot. The safety on the gun is fluid. You touch it even slightly, it moves. If it raises the least bit, it engages. At first I thought I had a malfunction but soon realized that I was the one with the malfunction, not the gun. When I began to wrap my thumb over the safety, that problem ceased.

Every one I’ve loaned the gun to has done the same thing until I pointed out you need to grip it differently to ensure the safety stays down. So it may not be common knowledge outside 1911 owners.

The “Hard Safety” – My H&K USP compact has what I call a hard safety. You have to push it down hard and when you do, you hear it click into place. It has two positions: on and off. There is no fluidity and no in-between. It is fairly easy to disengage when drawing from a holster as my thumb has more strength pushing down. It’s difficult for me to re-engage one handed before re-holstering. Until I started shooting the 1911 I assumed all safeties worked this way. I also tended to disengage the safety, shoot at the range, then re-engage the safety when I was done shooting for the day – because it was difficult to switch.

One other difference: Once the hammer is down on the 1911, you can’t put the “soft” safety on. Technically there is no need as the gun can’t be fired until the hammer is cocked, but I found this odd when I first started shooting the 1911. I always wanted to put the safety back on after I was done shooting to establish the habit firmly – no matter whether the hammer was up or down. With the H&K, you can always put the “hard” safety on. Whether the hammer is cocked or de-cocked, you can press the safety switch up. So this design will allow you to consistently apply the safety.

I am not passing judgement at this time on which I like best. I have many more hours with the 1911 and I’m clearly biased toward that design at this time. I just wanted to point out the differences for anyone considering a gun purchase. And I’ll admit that shooting the 1911 has made me much more aware of how safeties work and to disengage / reengage each time I draw / reholster.

One thought on “Hard Safety vs. Soft Safety”