Saturday morning I booked time at PDHSC and shot the XDS. I was VERY pleased with the gun! 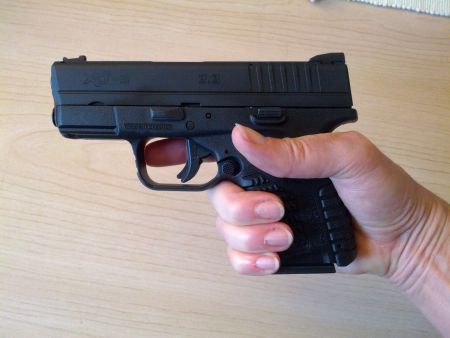 Perfect fit! The XDS and my small hands.

I decided to buy this gun because

I was concerned that the smaller gun would result in recoil I wouldn’t handle well. I shot the same gun in .45 a few months ago and had a real problem with limp wristing. If I had that problem with the 9mm version I was determined to overcome the problem – but it didn’t happen.

I alternated between the XD and the XDS and was pleasantly surprised to find I had better control of the XDS because I can get more of my hands around the grip. All my fingers fit on the grip with no need for the extended mag. The single stack design allows me to get a tight clamshell around the grip. The XD is wider. It forces my hands open and makes it much tougher to get a good clamping action.

In fact, the XD “jumps” in my hand just enough that I constantly need to readjust my grip between shots. Like the 1911, the slimmer grip on the XDS gives me more control and no need for readjustment.

I am used to loading via the slide lock release instead of racking the slide and I was concerned this would be much stiffer than my 1911. Once it was loaded and had a full magazine in the gun, it only required a light touch to release the slide.

The magazine release button is tight. I did struggle with that but I think with some use or a break in period it will be easier to work.

The sites are different than any of my other guns. It has the option of red or green optic front sights with white dot back sights. I’ll need to spend some time shooting with these to determine how I like (or dislike them).

Based on how I shot the gun and the ease of recoil control I’m very excited about this gun. I see a BUG match and experiments with carry holsters in the near future.